Westend Synagogue, Frankfurt – Not what I expected

Last week I was lucky enough to attend the Frankfurt Bookfair through work. That’s 3 days at the world’s largest bookfair talking to international booksellers and publishers about the project I’ve been working on for Blackwell’s and getting a feel for where it should go next. It’s certainly a privilege to take time out of the ‘day job’ to do this and see what the rest of the industry is doing but it was also the first two days of the Jewish festival of Succot (Tabernacles) for which I would usually attend synagogue for services and celebrations if I was at home in the UK.

Having never been to a synagogue in Germany before I thought I’d send the office at Frankfurt’s Westend Synagogue an email to ask if it was OK to visit for services and to bring with my boss, Matthew, who’s just began training to be a priest. He’d asked to attend services with me and this seemed like as good an opportunity as any. It was, of course, fine and we planned to go to the Saturday morning service, once we’d wrapped up work.

The chandelier and bimah of the Westend Synagogue in Frankfurt. (Wikipedia)

My synagogue in the UK is quite a modest building built in the 80s and serves not only as a prayer hall but as a multi-purpose community centre. This is common across most modern Jewish communities in the UK. In contrast, the synagogue in Frankfurt is a beautifully old style building from the late 1800s that had been renovated. It’s a large building with a feature blue tiled dome from which hangs an impressive chandelier. The columns downstairs that support the ladies galleries upstairs seem Egyptian in style and embellished with gold leaf, and this is all part of a bigger community centre. I assured Matthew that this was the exception, rather than the rule, of how Synagogues look! 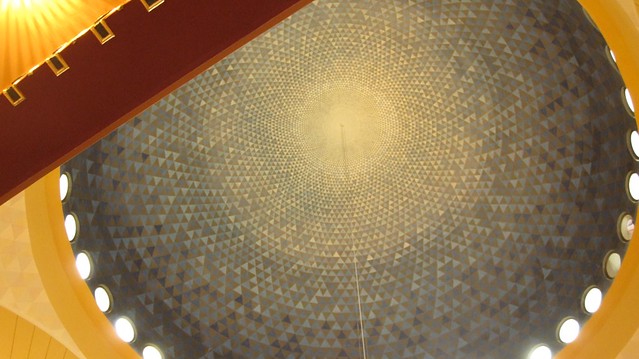 We arrived towards the end of the sabbath morning services and took our seats at the rear of the men’s area. I picked up a festival prayer book, part in Hebrew and part in German, and tried to find where in the service they were up to. The acoustics of the main room made it hard to discern what part of the service they were up to but once I’d figured that out it was easy to follow. Having a non-Jewish colleague with me I needed to explain quite a lot about who was doing what in the service, what each section was about and what all of the different traditions were. This made me think a lot more about different parts of the service and small bits of Jewish tradition that I take for granted and was possibly just as insightful for me as it was for him.  I pulled some pieces of information from the back of my brain that I didn’t even realise were there!

As well as it being the sabbath in the middle of the festival of Succot, there was a blessing for a groom who was to be married the following week. This is called an Auf Ruf. The groom gets called up to the bimah (prayer platform) when the scrolls of the Torah are brought out of the ark for the weekly reading. He gets to say a prayer before and after the reading of a section of the Torah to mark the occasion. In some communities in the UK, including my own, while the men sing songs of celebration after the blessing, the women throw sweets at the groom, mostly hoovered up by the children. On this day, the women of the Frankfurt community did the same and showers of multi coloured sweets rained down from above, much to the surprise of Matthew, who had never seen such a thing in a place of worship.  He also noticed that the children were all going to see the Rabbi when they came into the hall. He was impressed at their level of respect, until I pointed out that he too had a bag of sweets under his chair and the kids all knew that a customary ‘Gut Shabbes‘ to the Rabbi would get them a handful of sweets to see them through the morning!

While the core format of the service remains the same the world over (in orthodox synagogues), there are elements that fall outside of the service itself and are deemed additional. These are usually the fun songs that can have a variety of tunes to sing to but usually form a marker to where you might be in the order of play. One of these, Anim’Zmirot, is usually sung at the end of proceedings by a younger male member of the congregation who is pre-Bar-Mitzvah. When I was trying to find my place in the festival prayer book I recognised this song and then panicked that we’d arrived too late and the service was over. It turns out that it is the tradition in the Westend Synagogue to sing this particular song at the end of the morning service instead. Another song that has signified the end of the sabbath service is Adon Olam. Once again this falls outside what is traditionally considered the service but has always been the song that is sung when the men put away their Tallit, or prayer shauls, and ready themselves for kiddush. Not in this community though. When the service is over, it’s over and everyone was on their way.

The community in Frankfurt is thriving. Being a traditionally orthodox synagogue I was surprised to find not only a broad cross section of observance but it was very well attended too. There were people of all ages and not just the ageing community I was expecting. It also, wasn’t a community that was predominantly ultra orthodox and it made me happy to see that the Jewish community in this part of Germany seemed very much alive, perhaps something we don’t consider enough here in the UK. Upon approaching the building though, it’s very clear that the synagogue requires protection, although no trouble was apparent on the day that we visited. You can see from Google Street View that there are low level concrete barricades  protecting the front and side of the building, as well as a permanent police box on the corner of the street. As with any synagogue these days, they had their own security presence but both of these were an unfamiliar sight to Matthew. I think he found it a little un-nerving at first, but unfortunately this is something I’m used to.

As the service drew to a close we could smell the aroma of chicken soup and other delights being brought down to the Succah for a sit down kiddush. It seemed that this was to celebrate the Auf Ruf and as we had meetings to attend we decided to leave. Without a doubt this was the most impressive synagogue I have visited and more surprisingly it made me realise that I hadn’t been to many synagogues outside of the UK or Israel, when I possibly had the chance. Something I hope to rectify on future visits to new cities. If you have the opportunity to attend services at the Westend Synagogue in Frankfurt, I’d urge you to do so. It’s an experience you’ll keep with you for a long time.
2014bookfairbuchmessefrankfurtshabbatsuccotsynagoguevisitwestend

I worked at Television Centre. It was the best place ever!

9 things I learned since we had a dog